Posted on October 7, 2014 by mvzarchguest 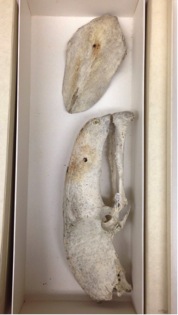 A few weeks ago Carla Cicero (Staff Curator of Birds) and I pulled a Cassowary skeleton (Casuarius bennetti hecki) to send a humerus to a researcher for sectioning. Since the Cassowary is an example of a primitive flightless bird (ratite), their bones contain important clues to bird evolution and potential ancestral characteristics. We soon discovered that the specimen (MVZ Bird 149262) was only a partial skeleton, with a sternum and pelvis that were bleached and worn (see photo at right). In addition, the skeleton box contained two humeri that were yellow, carved out, and clearly not from the same bird (see photos below). The carved out bones looked almost like some kind of man-made implement.

We proceeded to show the carved bones to people around the MVZ. To me they looked like salad tongs, but Michelle Koo (GIS and Bioinformatics Specialist) suggested that maybe they were used for medicinal purposes. Chris Conroy (Staff Curator of Mammals) was closest when he said that they looked like ‘tools.’ We went to the MVZ Bird Collection catalog card and indeed the skeleton contained a note of 2 ‘tools’ (see photo below). Because the sternum and pelvis were picked up by Alden Miller (MVZ Director and Curator of Birds, 1939 – 1965) on 21 October 1962, we also looked at Miller’s original field catalog and journal to see if we could get more information. His catalog didn’t mention the tools, and unfortunately the journal page is missing for that day. So we may never know where these tools actually came from.

Note found on the MVZ Catalog Card for the Cassowary, 24 September 2014, by Anna Hiller

However, out of curiosity, Carla went to our trusty friend Google and typed in ‘Cassowary Bone Tools’… and found tons of photos that looked just like the specimen! The two tools are actually Cassowary bone daggers. They were used in Papua New Guinea for hunting and ceremonial purposes.  Yet another exciting day in curatorial! You never quite know what treasures are hidden in the depths of MVZ… 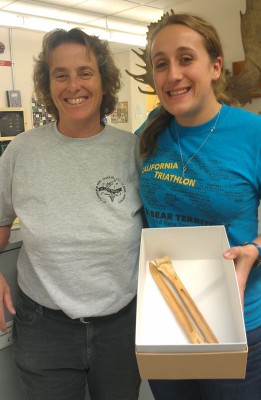 1 Response to The Bone Dagger Discovery